Nepantla Place: A One Woman Show 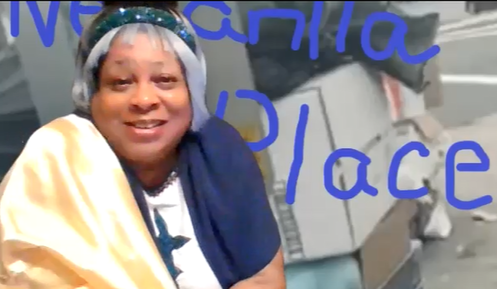 ​"Nepantla Place" is a play about homelessness; Live Garra Theatre puts a face on many who are invisible in our community. Effie, the woman in the play is a sage or a "mystic Mama" and is surviving on the streets but has an inspirational story to tell. As she says in the play; "I wake in the sunrise and bring the world its day over-easy; I'm taking a selfie with the universe. Without some badness to get over, what's in goodness sake?"

“Nepantla Place” is a living history; an interpretive oral public presentation. “Nepantla Place” is based on the perceptiveness of a woman called 'Effie' who lives in the imaginary world that binds her between the reality of being homeless and the emotional and spiritual crossroads of her life -- On Nepantla Place (Aztec philosophy). Effie's story will be a presentation of living in-between-ness. Her humanity will enlighten the audience. Effie has been living among the local community on the streets for over a decade. She resides there, acting as a fulcrum to engage the on-lookers (the audience) to pick up the mantle as a-call-to-action: just as the seasons change.

Nepantla is a concept used in Latino anthropology, social commentary, criticism, literature and art. It represents a concept of "in-between-ness." Nepantla is a Nahuatl word which means "in the middle of it" or "middle."

Nepantla was a term that was first used by the Nahuatl-speaking people in Mexico (Aztecs) during the 16th century. During this time, they were being colonized by the Spaniards and the concept of being "in between" was useful to describe how the experience felt.

Some attribute the concept directly to the colonized Aztec, and others have attributed anthropologist, Miguel Leon-Portilla, as first describing the concept. Leon-Portilla further describes how indigenous people who were conquered by the Spanish created their own "in between" culture. They would leave behind aspects of their culture that they could not synthesize into the new culture.

In the arts, nepantla is a creator's imaginary world that encompasses historical, emotional and spiritual aspects of life. Nepantla as a term might also refer to living in the borderlands or being at literal or metaphorical crossroads.
​
Nepantla can also describe individuals or groups who are today in conflict with a larger, perhaps more globally reaching culture or ideology. Nepantla has also been identified as a tool for political change. Individuals who live within two different "worlds" or "cultures" can act as a hinge to engage political discourse.
Donate